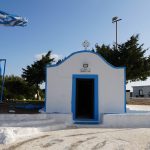 The monastery of Prophet Elias is built on the top of the mountain above the beach of Anthony Quinn, a picturesque monastery with the most imposing aunt you can meet in Faliraki as it is built in the highest part of the area.

The Monastery of the Holy Apostles in the port of Faliraki is one of the proud attractions
Attractions in the area include the archaeological site at Sarantapichos, near the village of Kalythies, which is believed to be part of the Acropolis of the Archaic era, but also Erimokastro, near the sea between the craggy and ladikos beach, with archaic wall ruins.