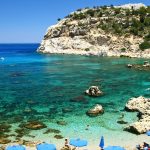 The truth is that the names of most of Greece’s beautiful beaches hide in them some nice history. They are hiding an event that has led the local community to give each one a special name. Names that have remained unchanged over the years and, in many cases, today their origin has been forgotten. To find out the cause or the fact that a Greek beach has been named, one has to reach out to some older locals. They will have to fill in with their memories as a puzzle to arrive at a safe conclusion.
This is not the case for the Anthony Quinn Beach in Rhodes. And it is not true as the story of the baptism of that beach in the name of the famous actor was made in a cinematic way. After all, the media of the time had devoted enough ink to describe the events that led to this name.
Rhodes: Anthony Quinn Beach
The story begins in 1960. In the filming of the film “The Canons of Navarone” starring Anthony Quinn, part of the filming was chosen to take place in a cove. A bay located 15 kilometers from the center of Rhodes and only 3 from Faliraki. Beach with pebbles, pine trees and turquoise waters. The name of this beach until then was Vagies. The actor was fascinated by the beauty of the landscape. So he decided to buy this small cove to create a place of rest for actors and film people in general. In his initiative, the Greek state initially helped. He was then given the land for a symbolic amount for the season. As an example of recognizing the actor’s contribution to promoting Greece. It is true that Antony Quinn had done his utmost to promote the beauty of our country through his films. Both with “Navarone Canons” and with Alexis Zorba in Michalis Cacogiannis. But later on with the “Greek tycoon” where he embodied Aristotle Onassis.

For the inhabitants of Rhodes, the beach is named after him and this will forever be a reminder of his passing through our places, and how much he loved this country. After all, Rhodes is only happy to remember him.