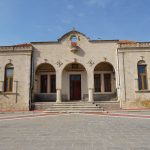 The building where the Town Hall of Kallithea Municipality is was built by the Italians and it is dated
around 1934. It is an architectural masterpiece, with 440 sq.m. surface area, which was built in order to
accommodate the Italian governors of the German-Italian Occupation period.
Over its imposing entrance there is a small balcony which was used by the Italian occupation forces in
order to gather the villagers or the army and make announcements.
After the war was over and the Dodecanese was freed from the conquerors, when the islands were
united with the rest of Greece, on March 7, 1948, the building was offered to the local community to be
used as a school.
The 7 great halls were accommodating pupils until the first years of the new millennium. When more
modern schools were built in the area, the building was granted to the local authorities to be used as
offices. Extensive rennovations took place in the building, without however altering the building’s
original character; the building is protected by the state. Mr Iatridis Ioannis, who had been the President
of Kalithies village community, was elected as the Mayor in the new municipality, created according to
the local authorities integration law “Kapodistrias”.
Nowadays, among other services, the building also accommodates the office for issuing wedding
licenses, as well as the municipality registry office for declaring all child births and name givings.
By an initiative led by teachers and the director of the 3 rd kindergarden of Kalithies, Mrs Nitsa Argyrou-
Aggeliniou, the building now hosts a school museum. One of its impressive halls has been modified to
look like a school classroom of the old times, with a blackboard, old desks and everything related to an
old school classroom. The museum and the building are accessible for visitors from Monday to Friday,
8:00-15:00. The school building is located at Kalithies village, next to the Metamorfosis of the Christ
(Transfiguration)-Holy Cross church.